This article will look at using the Conversation scope defined in JSR 299 (Java Contexts and Dependency Injection), and released as part of Java EE 6. For now, we’ll stick to non-data driven examples as we explore the ins and outs of the Conversation scope. We’ll finish up by creating a workspace manager so we can list all the active conversations and switch between them.

A Conversation is like a numbered bucket in the session that exists until either the end of the users session, the conversation times out, or the server side code deliberately ends the conversation. The benefits of a conversational scope are many, letting us easily create pages that can be opened in multiple tabs without having to juggle the state on the client without filling the session with data that will last as long as the user session should we forget to remove it.

Simple enough, now lets add a page called listEdit.xhtmlthat lets us enter the value, post the value back and see what the message is.

Edit home.xhtml to include a link to this page :

Open up the home page and click the link to go to the listEdit page. If we enter a value in the input box and click the submit button, predictably, our message says that the value is whatever we entered. 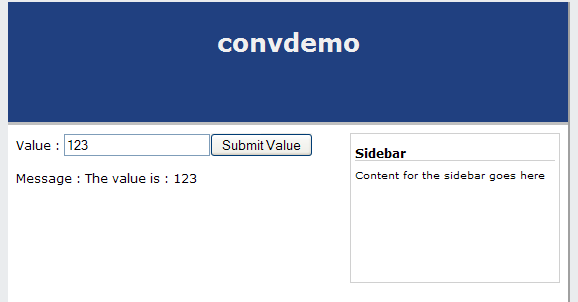 Let’s add something a bit more stateful to the page such as a list of values that we have added previously. In our backing bean, add the following field and getter method and a method to add the value.

Now we will add the list of values to our page to be displayed.

If we refresh our page, enter a number and click submit, you will see that the number appears at the bottom of the page where it should. When we click the submit button on the form the value is assigned to the value attribute. When the addToList method is called, the value attribute is added to the list. When the page is rendered, the latest value is used to generate the message and for the list of items we return the list containing one item, the new value.

So far so good. Let’s enter a new number and add it to the list. When we click the button the second time, the only number in the list of numbers is the one we just entered. The first value is gone! The problem is that the second time we posted the value the bean was re-constructed from scratch and had no idea whatsoever about the first value we added to the list. There was nothing on the form to tell the bean about the first number even though we displayed it on the page. The backing bean keeps forgetting our list of numbers from one request to the next, or in other words, our application is missing some state.

As per part 1, there are a number of ways we can get around this problem. We could save the list to the database each time we post, which is over kill for this simple task. We could push the state down to the client, say using a comma delimited list of existing numbers pushed into a hidden field. When the form is posted, the comma delimited list is sent back to the server where the numbers are unpacked and the list is rebuilt on the server side and the state is restored.
Both of these two methods are doable but what happens when we have more information on the server that we need to keep hold of? Do we have to keep adding add each piece of information to the client state manually, including passing it around from one page to the next for multi-page processes? What if it is a list of entity objects we want to hold on to? Do we just save the Ids on the client and keep re-loading them from the database each time?
These solutions are impractical from the perspective of building a maintainable app quickly. However, note that these solutions are completely possible with JSF and CDI. It just offers better alternatives, but the opportunity to get under the hood and use more lower level solutions in the interests of optimizing the application are always there. This is an important factor since if you have a widely used conversational page that is creating a bottle neck, you can refactor it down to use a more stateless approach.

Reload our page and you can see how you can enter and submit as many numbers as you want to the page and the list state is managed. 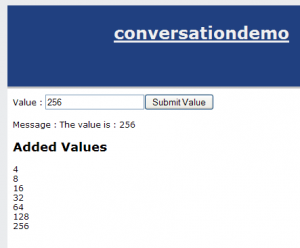 Conversations are just a natural extension of the existing scopes in current web applications. They also become very natural to use. Let’s add another page that lets us review our list of numbers before ‘confirming’ them. Add the following new button at the bottom of our page :

Because the action attribute is set to review we will create a new page called review.xhtml that will display the numbers. Our first concern obviously is ‘where does it get the list of numbers from?’, well the answer is, from the same place it got the numbers from last time, using the expression #{bean.values}.

Getting back to the page, we just want to add our confirm method to our backing bean. This method ends the conversation and redirects to the home page which is going back to the number entry page.

Add the following at the top of either the review or list edit page to see the conversation Id you are currently in :

If you run the application, you can add numbers and when you click review, you get a list of all the numbers you just entered on a separate page. 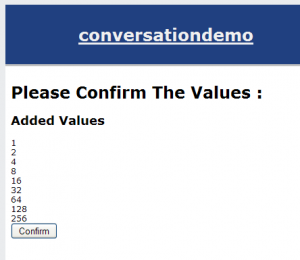 If we were managing state ourselves, we would have to pass something to the review page to let is know what the list of numbers was, either a database row key, or the comma delimited values. Again, the more state you have to pass around the less verbose and maintainable the application becomes. CDI is automatically passing our key (the conversation id) around for us. Under the review button the list edit page, add the following GET link :

This lets you start a fresh new list in a separate window (since we didn’t specify an outcome it defaults to the current page). If you create a new list and add some numbers you can see that you can manage separate lists independently without doing anything to handle multiple browser windows.

One cool feature of Seam that had a lot of potential was workspace management which lets you see a list of active conversations and select one. We are going to implement a version of that here by providing the user with a set of links that takes us to the active conversation. Create a new bean that is session scoped that will keep a track of our conversation ids.

We will inject this session scoped bean into our backing bean and change the postConstruct and confirm methods in the BackingBean class to add and remove the conversation from the list.

Now we need some view code to display the list of conversations and provide links to them. Simply add this to the home.xhtml page, and even the listEdit.xhtml or review.xhtml pages if you want :

That’s all you need for a workspace demonstration. You can create new lists and if you jump back to the home page, you will see the available conversations and be able to click the link and jump back into the conversation. When you review the list and confirm it and the conversation ends, when you end up back on the front page, that conversation is longer listed. 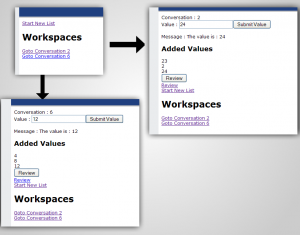 This is a fairly powerful mechanism that is built upon the simplicity of CDI Conversations. There is very little work that is required to use conversations, just inject the Conversation instance and call the begin() and end() methods when you need to start and end the conversation. Conversations also have a minimal impact on our code, mainly just an annotation since the getters and settings and other methods don’t change. We can also easily revert back to a stateless request scoped solution should we have to which would cause additional code to be required to read/write the list to the client.
Conversations should be used with care, especially in terms of making sure you have strict demarcation boundaries, and careful consideration should be given to determining what you include in a conversation.

You can download the maven project source code for this demo (Conversation Demo ), just unzip it and enter mvn jetty:run and navigate to http://localhost:8080/conversationdemo/home.jsf.

I've been developing software for over 20 years, mostly in Java. This site is a home for my open source projects, writings, articles and tutorials mainly focusing on Java and Java EE from a real world perspective.